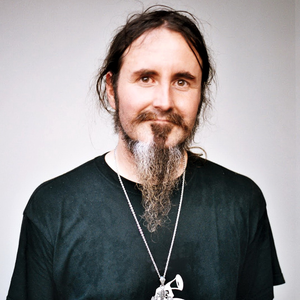 Trey Spruance was born in 1969 as Preston Lea Spruance III & grew up in Eureka, California.

In 1985, while still at Eureka High school, he formed Mr Bungle with schoolmates Mike Patton,Trevor Dunn & Jed Watts . On leaving Eureka he attended Humboldt State University in Arcata, California, where he majored in music.

Mr Bungle released their debut self titled album on Warner Bros in 1991 & went on to release 2 more (1995's Disco Volante & 1999's California) before being dropped by the label.

Now in his late 30s, he has seen a lot as a musician, everything from international cult stardom with Mr Bungle & Faith No More (Briefly in 1995 as replacement guitarist for Jim Martin), to the most obscure corners of the San Francisco noise underground, during which time he was also getting into (and later, out of) the more prestigious avant garde orbit revolving around John Zorn and his Tzadik record label.

Through this Spruance has evolved over the years from a teenage guitar shredding prodigy into a skilled multi instrumentalist, producer and arranger.

Over the years he has formed and been a part of countless "side" projects (Secret Chiefs 3, Faxed Head etc), setup his own home studio (Forking Paths) and in 1998 founded his own record label, Mimicry records.

Over the past couple of years, while Mr Bungle has been in deep hibernation (defunct actually), Spruance has been keeping an almost suspiciously low profile while continuing to work on his various side projects and has plans of setting up his own commercial studio.